After a trip to London, Nathan came home and couldn’t stop thinking about the Bao buns that he’d tried while overseas… If you don’t know what Bao is, it is a type of Chinese street food, best described as a deliciously warm treat of various fillings wrapped inside a sweet, fluffy white dough that somewhat resembles the shape of a taco shell. See above, try not to drool.

The Story of Bao Brothers

After becoming somewhat overwhelmed by Nathan’s persistent Bao-filled dreams, the brothers came up with the idea to merge their entrepreneurial talents, buy a marquee and a few eskies from Bunnings, pack up Dave’s work truck and head to the markets on the weekend. On that first weekend, they sold out in less than two hours. At this point, they figured they were onto something.

After getting home at 2am from work through the week, Nathan would stay up rolling Bao until about 5am before heading into Subo again the next day, with the pair working around the clock on events including markets, weddings and festivals. In 2016, they left their jobs, upgraded to a dedicated trailer (then a food truck), and by 2017 they had opened their first tiny store in Newcastle West. When they outgrew that store in November 2019, their flagship in Charlestown opened – the brand had a facelift, a new marketing plan, and the brothers were ready to roll (Bao).

Come 2020, the pandemic arrived and events were all but obliterated, yet the pair doubled down. Realising takeaway and DIY ‘at-home’ bao options born out of necessity were proving to be popular, it was clear that a franchise model could be a possibility for their humble Bao buns – not bad for two regular guys who still insist today that they are just “winging it”.

Fast forward to January 2022, and there are four stores across NSW – Charlestown and Kotara in Newcastle, Chippendale in Sydney, and as of tomorrow – Terrigal here on the beautiful Central Coast. Terrigal is also the first franchised store, owned by local couple, Tim Gunasinghe and Nicole Schweizer-Gunasinghe. Starting their hospitality journey with Louvers café in Terrigal all the way back in the 90s, before moving on to open New York Pizza Bar & Grill in Erina, these two are seasoned professionals in the game of running a tight foodie ship, so the Bao Brothers know that they have the best at the helm. As for the space, it’s bright, colourful, and as your parents might say – pretty “zany”.  Asian-style comic murals cover the walls, with neon signage ensuring that the both the interiors and atmosphere are busy, fun and loud.

Nathan and Dave insist that this is “not fast food, but good food made fast” – and upon trying the cuisine at launch night, we wholeheartedly agree. The original options of ‘Notorious P.I.G.’ (pork), ‘Tupac Chikur’ (chicken) and ‘Mushrooms with Attitude’ remain smash hits, with other menu options including prawn, duck and beef Bao also on offer. The chilli jam is a must-try, as are both versions of their spring rolls. 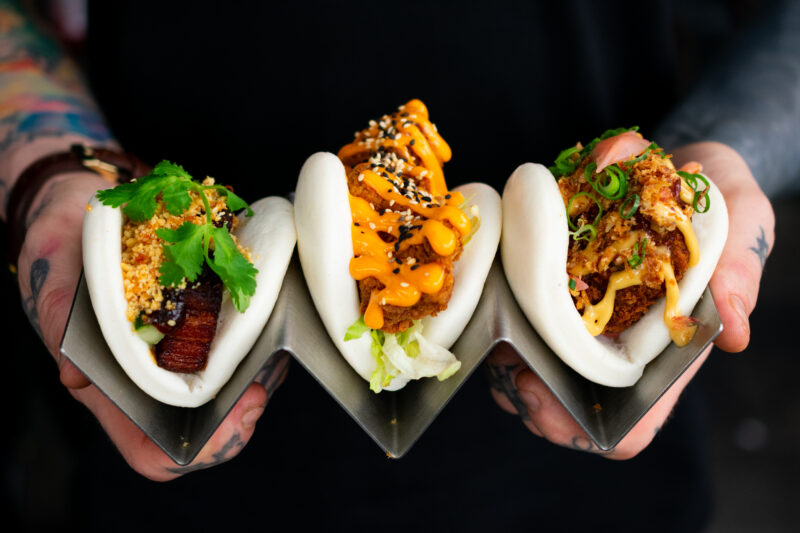 To see what all the fuss is about, be sure to check out the new Bao Brothers Terrigal at 88 Terrigal Esplanade, right opposite the beach. Their official opening is from 11am this Saturday, January 8.

To ogle at the food and keep up with their news (as well as the next 10 stores that they plan to open this year), check out @baobrotherseatery on socials.