On October 7, the social media space on the Central Coast began to buzz following an exciting online announcement…

“Hello Gosford…since we have been locked down, Mumbo Jumbo’s and Shady Palms have had a baby…” That beautiful baby is Drifters Wharf in Gosford, and to celebrate its December 3 opening, that baby had one of the best birthday parties that the Central Coast has seen…with locals and Sydneysiders alike absolutely loving it.

In the eight weeks leading up to the opening, the distinctive former Iguana Joes venue on Gosford’s waterfront had been stirring with renovation activity, as owners Isaac Adele and Steve Sewell, along with their teams, laboriously rebuilt the space to give it a makeover for the ages.

From the moment you walk in, the upbeat mood is underscored by stylish nautical-themed decor. There are vast open spaces that lend themselves perfectly to a boogie, while distressed timber, rope and glass accents are in abundance, set against a (nearly) all white backdrop. Pops of colour add fun to a space that is otherwise clean, classy and full of light.

As the kids would say – the place is an absolute vibe.

The opening weekend set a positive tone for hundreds of curious patrons, as the venue hit its 800-person capacity on both nights.

Drifters has partnered with Kingdom Sounds, Sewell’s venue and event specialist business, so we know that the headliner acts of Hot Dub Time Machine (Saturday) and Sneaky Sound System (Sunday) are only a hint at bigger things to come.

Hermitude has just been announced as the headliner act for Drifters’ 2021 NYE party, which promises fireworks, further support acts and the best time the Coast will have undoubtedly seen for the best part of two years.

It’s not surprising, then, that the Drifters team see the venue as providing a “festival by the sea”. It is important to note, however, that this is only part of the intended experience.

The food menu has a seafood focus – think crispy prawn pizzas, at least five types of fish, and multiple oyster options – but there is something for everyone with several meat, gluten-free and veggie options also gracing the menu. At the bar, it is quite evident that the venue has partnered with some of the biggest alcohol brands in the world, offering us over 50 beers on tap, along with premium wines and spirits. 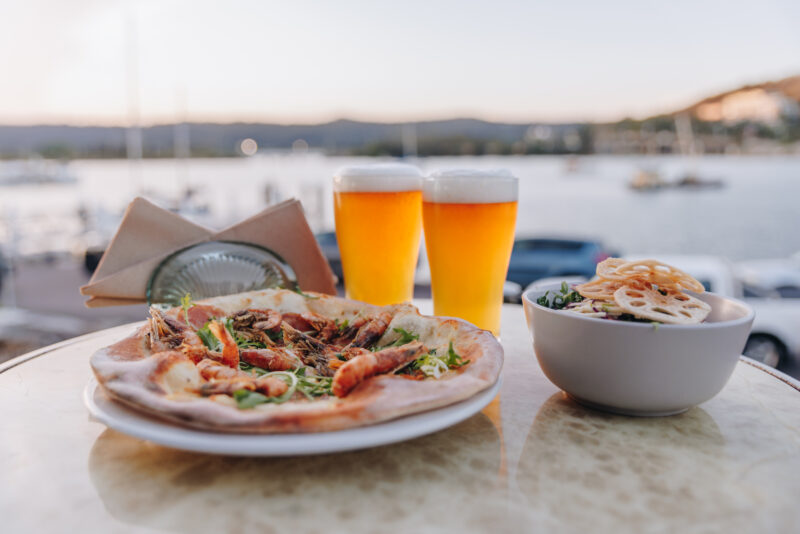 Let’s just say we are very impressed so far. Is Drifters the final jewel in the Central Coast venue crown for these guys, or will they keep going?

Only time will tell… but oh boy, we really hope they do.

To make a booking, head to https://drifterswharf.com.au/.

Tickets for the upcoming NYE event featuring Hermitude can be purchased at: https://www.eventbrite.com.au/e/drifters-wharf-new-years-eve-with-hermitude-live-tickets-223725146937.