If Bob Marley was alive and happened to pop into the Coast, Mumbo Jumbos would be his local hangout.

Combining an impressive selection of rums with infectious reggae beats and a rooftop overlooking Terrigal Beach, the new bar brings some serious swagger to the seaside suburb. Mumbo Jumbos is the brainchild of a group of like-minded Coasties who embarked on the project in a bid to bring some culture and flavour to the Coast.

The team have all been heavily engaged in their own successful businesses well before the idea for a bar came to life.

Justin Hyland owns a landscaping business while also finding time to indulge his passion for music, collaborating with the likes of 21 Pilots and Empire of the Sun; Isaac Adele owns Optus stores in Gosford and Wyong; and Steve Sewell has been working in the music industry for years with his booking agency Kingdom Sounds (most recently bringing Fifty Cent to Parramatta) and has brought along staffer Heather Bergen to complete the Mumbo Jumbos four. 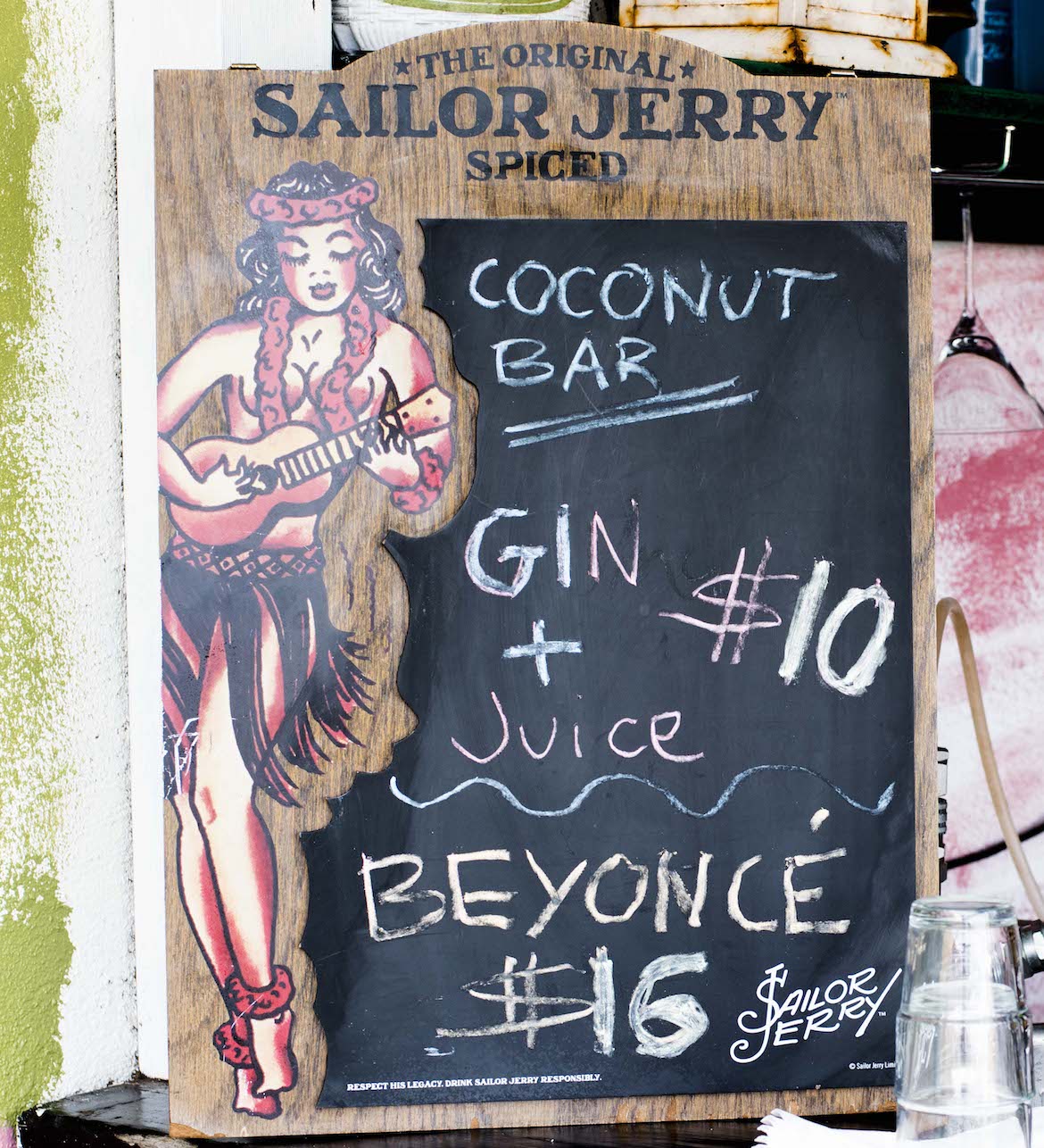 One thing they all have in common is a love for music, drinking and hanging out – enter Mumbo Jumbos, their new playground and the Coast’s coolest new bar.

“We wanted to add to the culture of the Coast with a space that’s cool, artistic and different,” Justin explained.

“We wanted to offer something fresh and unique to the region with a space that can be enjoyed by all ages,” he said.

And with so much experience working with musos, Steve promises it will also be a hot bed of talent.

“We look forward to supporting tons of local talent with events that celebrate the Coast’s artists and other creatives.” 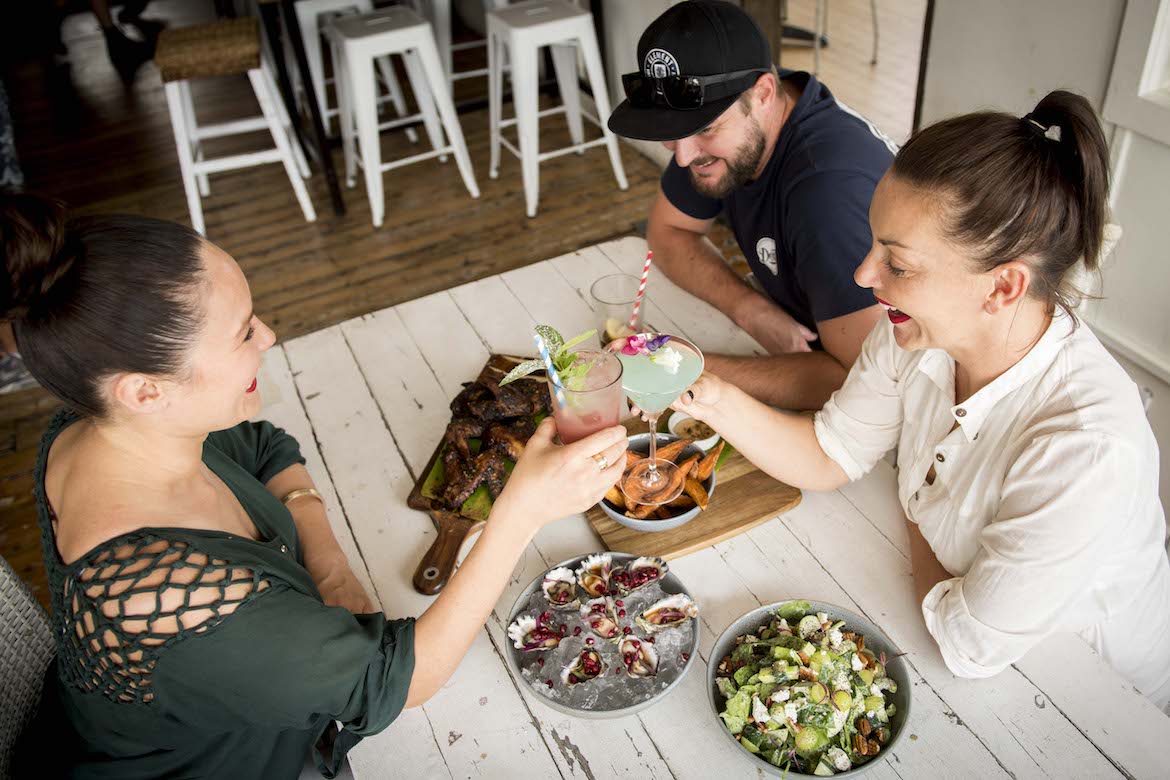 When the group laid eyes on the old Joseph’s Coat bar, it was love at first sight.

“We wanted to bring the feeling of island life to the Central Coast, and when we found the worn and weathered beach shack in Terrigal, we knew that it was a perfect home for what we had envisioned,” Steve said.

The astro-turfed back bar with striped brollies, colourful festoon lights, bamboo stools and a drinks shack is like the rooftop of dudes’ dreams.

Inside, white-washed wood meets palm-themed everything and the plethora of cane couches and leaf-bladed fans combine for a retro Hawaiian condo feel.

Most of the fitout is upcycled and vintage furniture sourced from old auction houses, and despite the cacophony of colours, textures and styles, everything looks right at home.

Some thatched roofing and stools overlooking the sea complete the tropical chic scene. 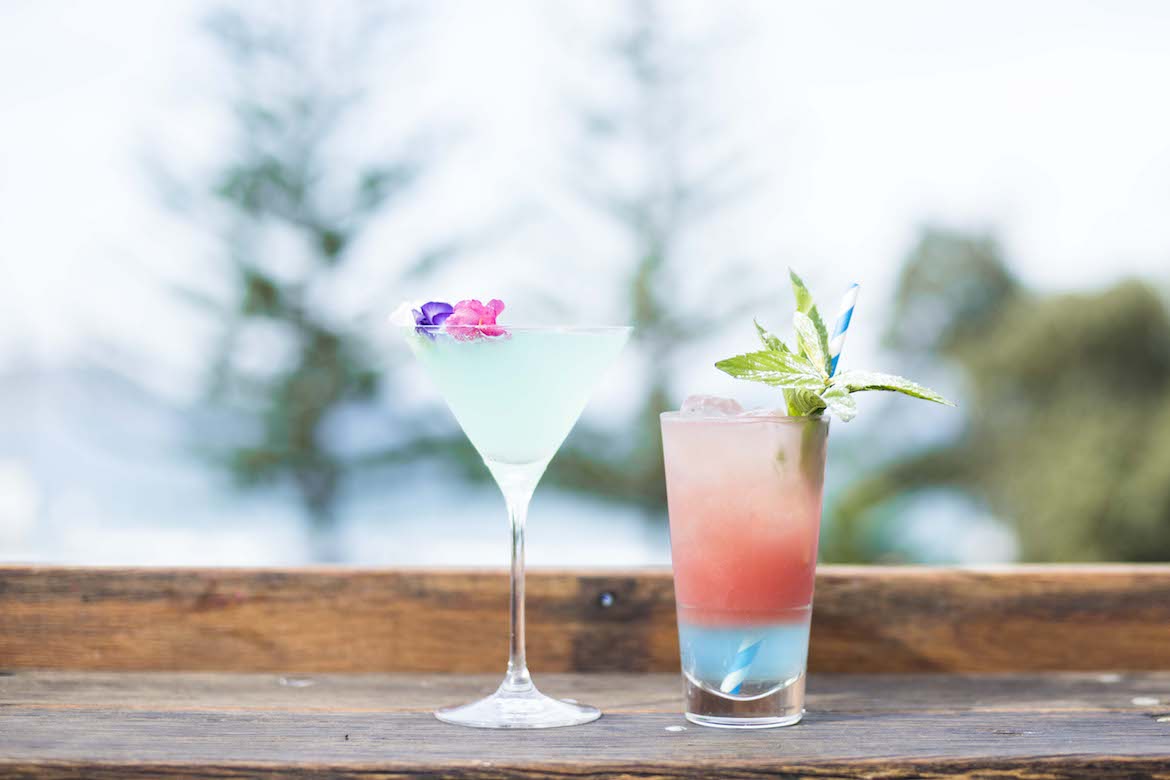 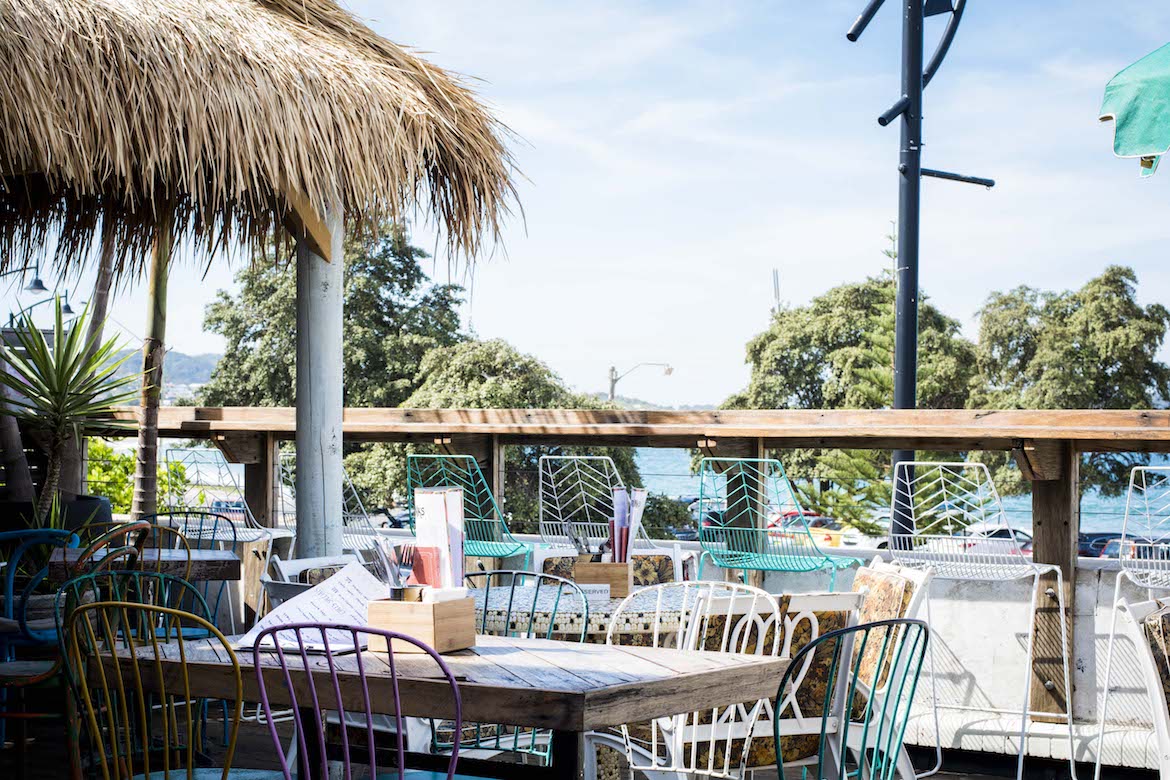 Inspired by all things Jamaican, Mumbo Jumbos is home to Red Stripe beer and a rum list as long as Bob Marley’s dreadlocks.

Offering more than 40 types of rum from smoked to spiced and dark to coconut – you name it, they’ve got it, including El Dorado rum liqueur, the ‘Caribbean Baileys’.

If, like Beyoncé, you’ve been ‘drinking watermelon’, you’ll love her fave cocktail, or dive into a sparkling blue lagoon with a Pretty Mumma – a bubbly turquoise champagne cocktail.

Cocktails have been a big hit since the bar opened in December showing how desperately locals wanted to quench their thirst with some fun and fruity beachside beverages. 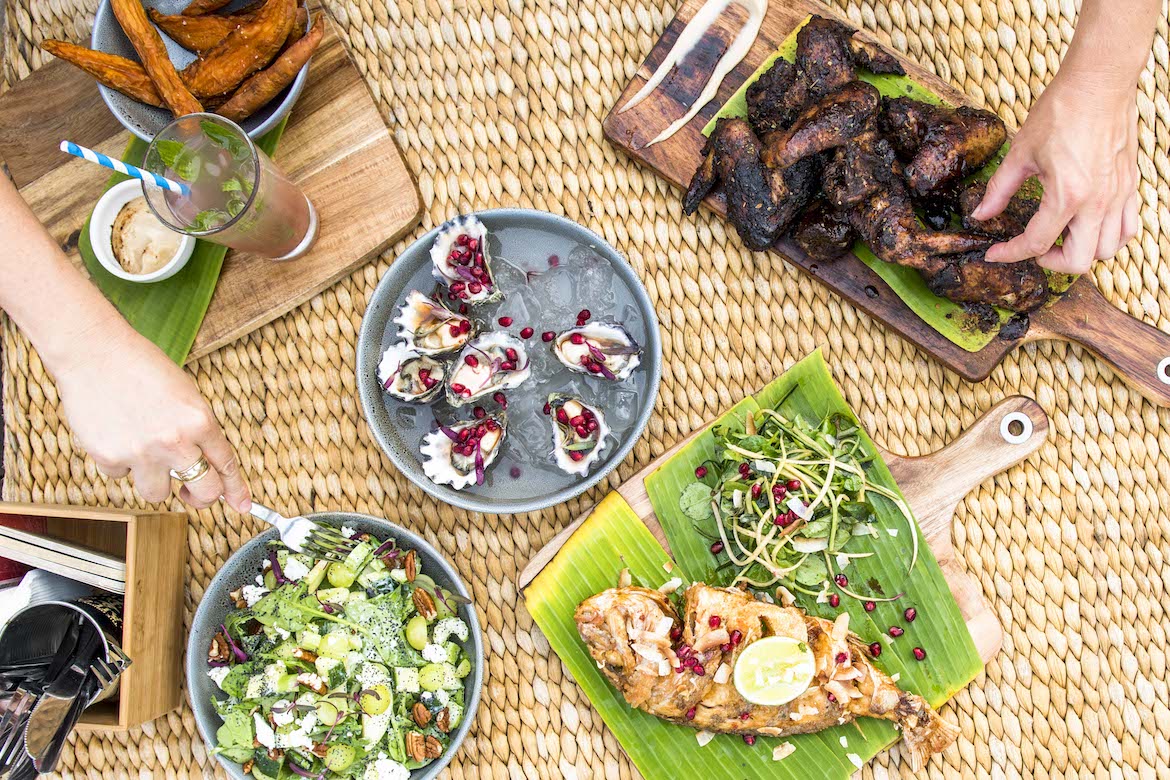 From the jerk-spiced baby snapper with a chilli rum dressing to the spiced rum oysters with pomegranate and sticky jerk chicken wings with smoked garlic aioli, the menu is exploding with exotic Caribbean flavours.

The sticky and succulent wings are made with secret spices in what is perhaps the most carefully guarded secret since the Colonel created KFC. They’re just as finger-lickin’ good.

The excitement doesn’t end for vegetarians with the kitchen churning out chewy fingers of sweet potato served with chilli tomato relish and a tasty goat’s cheese salad with grapes, apple, spinach, celery, pecans and a poppy seed yoghurt dressing.

A barbecue station ensures the jerk chicken is always smokin’. 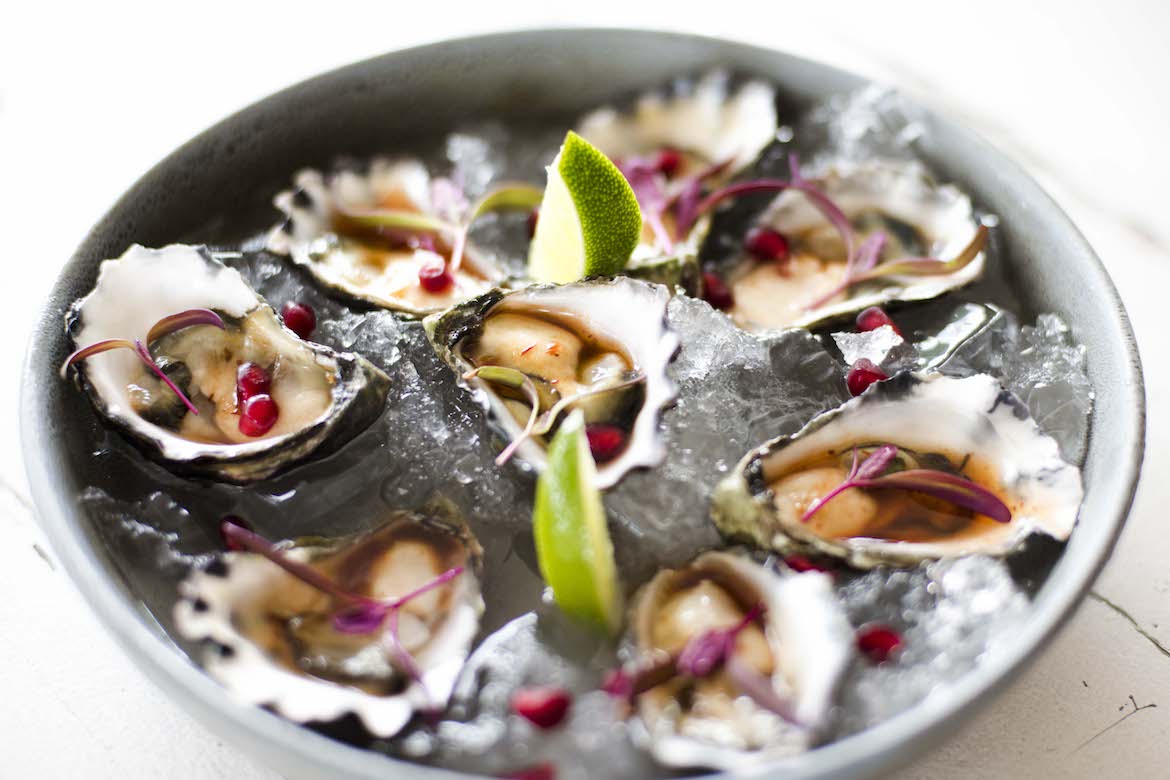 While it’s open from Wednesday to Sunday, the rooftop bar really starts rocking on weekends.

Sundays are all about seafood and soul with Coastie DJ Cool Hand Luke mixing up reggae funk records while locals devour platters of fresh prawns, oysters and mussels by the sea. 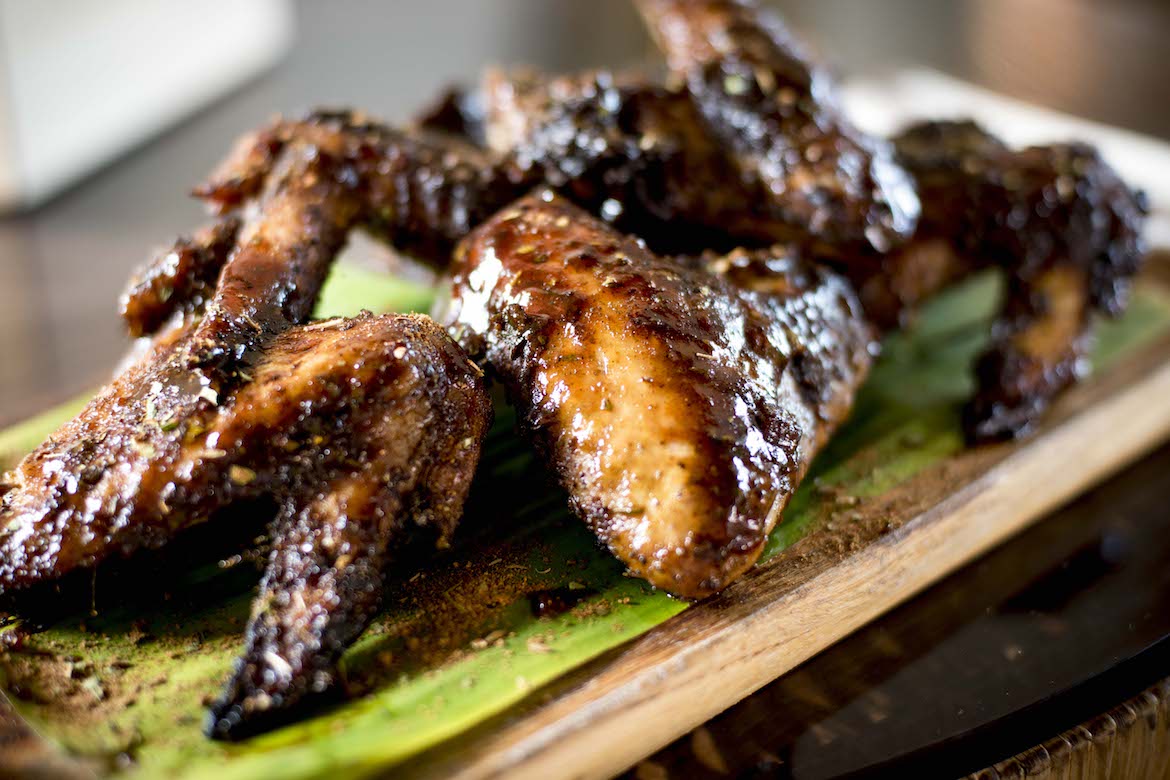 With waves crashing nearby, the smell of jerk chicken and salt in the air and some casual reggae beats pumping, punters could be forgiven for thinking they’ve landed at a Jamaican beach bar.

But Mumbo Jumbos is right here on the Coast, making damn good use of some prime real estate overlooking one of our best beaches. Yeah mon.

Mumbo Jumbos is open from 4pm Tuesday to Thursday, from 2pm on Friday and all day Saturday and Sunday.