This has been a big year for high jump champion Nicola McDermott. She won silver at the Tokyo Olympics, set a new national record (three times) and became the second Australian woman in history to win an Olympic high jump medal – but she’s not done yet. 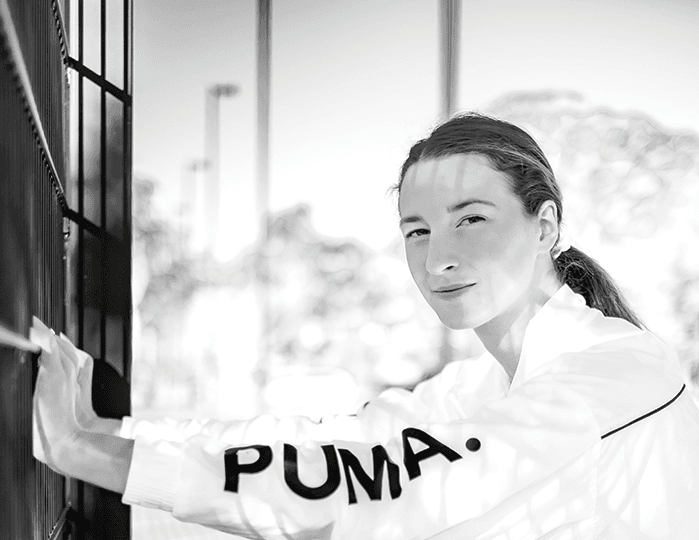 So reads the caption of the video on Nicola McDermott’s YouTube channel of her Tokyo Olympic-qualifying leap (1.96m), at Ostrava in the Czech Republic back in 2019. Watching that jump in the wee hours of the morning at home in Australia, I remember noticing Nic’s smile right before she took her run up and cleared the bar.

As a fellow (slightly less Olympic) athlete who picked up the sport later in life, I’ve had the pleasure of watching Nicola compete and train at Mingara Regional Athletics Centre, here on the Central Coast, since 2014. She is always focused and methodical. For this jump though, she was relaxed, joyful – and fearless, too. Something had changed. With a huge smile across her face, jumping that Olympic qualifier just looked so easy.

When I asked Nicola to describe how she felt that day, though, her response was surprising.

“I’d just managed to jump 1.96m, the Olympic qualifier. I’d jumped 1.92m two days beforehand – a 4cm season’s best and a 2cm personal best – and was just feeling so tired. But I remember walking into the stadium and thinking to myself, If it gets to the Olympics and you’ve reached the final, are you going to rock up and say, ‘I’m so tired from jumping?’ or are you going to go into that final with your heart and your head high and say, ‘You know what, I’m going to give this 100 per cent whatever it costs.’ And that’s what I did.” When Nicola jumped 2.01m to set a second new Australian record in Stockholm earlier this year, she apparently “didn’t feel that good” either. When I ask her to explain what she means, she just smiles.

“I had a decision to make – I can give up now, or I can keep pushing, and I knew it was worth it. That’s what’s remarkable about these jumps – I didn’t feel good for them. I was so tired, but it’s not about the feeling. It’s about the knowing and having the faith to convert that into a performance.”

Fast-forward two years, and Nicola’s faith in herself and God has pushed her to even greater heights – including successive Australian and Oceania records of 2m in April at the 2021 Australian Track & Field Championships, 2.01m less than three months later at the Stockholm Diamond League, and 2.02m in Tokyo at the Olympics for the silver medal in August. This was also the first podium finish for an Australian woman in the high jump since Michele Mason-Brown won silver at the 1964 Tokyo Olympics.

Born on the Central Coast in 1996, Mingara-based Nicola has been a fixture at the track for upwards of 15 years since joining Gosford Little Athletics at the age of eight. A warm, kind and welcoming personality, Nicola is far from the aloof athlete stereotype. You can tell from watching her train that she loves the sport itself, the learning process, her squad and her coach, Matt Horsnell.

An unassuming and light-hearted character who loves a good joke, Matt has had faith in “Nic” since the beginning, and the pair undoubtedly make one hell of a team. She describes their relationship as one of learning (for both of them) and trust. “When I was young, and he told me that he had a 10-year plan for me, that was on him – he didn’t even know the kind of athlete that I could become. He was willing to commit those 10 years for me. I didn’t know the potential that he had as a coach (Matt has a ‘normal’ job, too), or if I’d need to move to the city, or a sports institute, but we just had this trust, and it has flourished – because we chose each other.”

The partnership is now preparing for yet another international season in 2022, with their sights set on the Commonwealth Games in Birmingham in late July, and the World Athletics Championships set to be held in Eugene, Oregon (USA) early August.

The goal? To be crowned the Commonwealth Games champion and clinch a medal at “Worlds”. Nicola has also nearly completed her degree in biochemistry at the University of Sydney, so knows that she should only improve when her high-jump career becomes her sole focus.

To close off our time together, I asked Nicola what had changed in 2019 – other than the fact that this was the year that she also started her infamous journalling between jumps in competition.

“The thing that changed for me is that my identity used to be in my performance. If I jumped well, I felt good about myself, and if I jumped poorly, my perception of who I was as a person was dramatically affected. Having that much intense pressure on performance can make it really scary – that’s why you saw me looking so serious.

“I think that this is where my faith comes into it – I know that I’m loved and valuable, even without jumping high. If I come dead last and don’t clear the bar, it’s okay, because I know that my performance and everything else I do in my life can never affect the way that God loves me. I make the decision to take that knowledge into every competition now. Even if I’m tired, and it’s a struggle, I know that every jump is an opportunity to showcase what that love looks like. I’m having fun with the sport – I’m not stressed – and I think that’s why I keep improving. I hope that I can encourage others in sport to have the same approach.”

Whether our beliefs are grounded in religion or otherwise – it goes without saying that, now more than ever, a little faith can never go astray.