Home Eat Safran: Feast Like An Ottoman at Ettalong

Tapas has been a roaring food trend for many years but it’s usually the Spanish kind.

A restaurant in Ettalong is bringing the Turkish version, meze, to the table on the Central Coast.

From the Persian mazze, meaning to relish, Safran restaurant specialises in small plates of Turkish tapas designed to share and savour with friends over a bottle of wine or some raki. We have it on good authority that rose pairs nicely with meze.

If you’re not a wine drinker, there’s an intriguing Turkish delight cocktail with rose water, Turkey’s Efes pilsner or raki, the Turk’s take on ouzo. Dining at Safran is either al fresco in the paved, palm-fringed courtyard of Ettalong’s retro market complex, or inside the contemporary restaurant with black finishes and white tablecloths.

Repeat diners will notice the same familiar faces tending to their table, ensuring the service is seamless and in line with the quality of the cuisine. 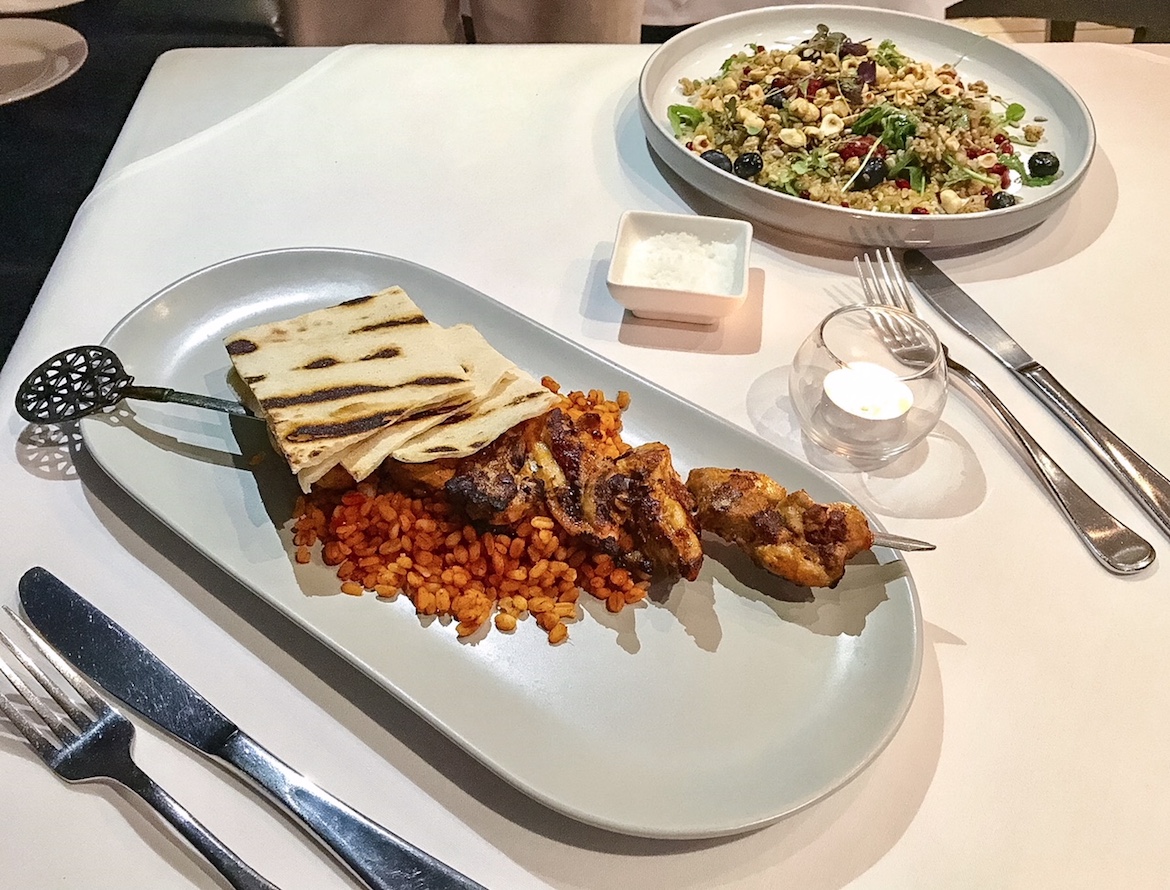 From pine nuts to pomegranate, the meze flavours are exotic and the method authentic but there is a modern Australian twist.

There are traditional Turkish flavours like spicy chunks of sausage served upturned in a garlic yoghurt; chicken shish kebab with bulgur pilaf and flat bread; three cheese borek – heavenly fried parcels of feta, mozzarella and haloumi – and an exciting freekeh salad bursting with flavour thanks to dried mulberries, blueberries and pomegranate. Then there are some quasi Aussie-Ottoman dishes which combine local seafood and produce with Mediterranean and Middle Eastern flavours.

The hummus is pimped out with a hazelnut dukkah, roasted cauliflower florets and asparagus stems; the seared scallops are sprinkled with all the colours of the Turkish spice rainbow, and octopus tentacles are served with saffron cream.

The Turkish-Australian flavours impressed the Australian Good Food Guide judges who awarded the restaurant its first chef hat in 2020.

If it was earlier in the day we’d be tempted to have a Turkish coffee with our dessert and see what fortunes the dark grains reveal.

We settle for the last of our rose with a tasting plate that brings together the famous flavours of the Ottoman Empire – Turkish delight, milk pudding, semolina cake and baklava.

Coastal Chic Tip: If the exotic menu is too hard to navigate, try the banquet – it combines some of Safran’s best dishes into one epic Turkish feast

Bar Botanica: Gin and Gelato in the Garden

Seafood by the Sea: The Coast’s Best Catch

GF/V/DF: Coastie Cafes Cater to All