There’s nothing more refreshing in summer than an ice-cold beer and there’s no more iconic than our own local beer brewed by Six String Brewing Co.

Six String has been brewing refreshing ales and lagers at Erina since 2013 and in only a couple of years, the company’s trademark guitar pick has become synonymous with the NSW Central Coast and great beer. On tap all over the Central Coast from Margarita Daze to Bombini, it’s locally owned, made, poured and enjoyed.

You’ll find Six String’s combined brew house and bar behind a non-descript door on a large salmon-coloured warehouse, tucked away in an industrial estate off The Entrance Road. 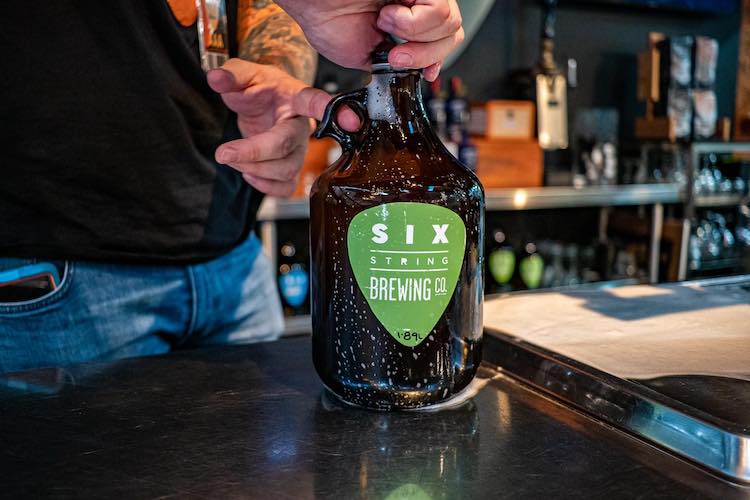 The building doesn’t look like much but inside is where the Six String magic happens. A world of kegs, vats and taps, it’s the domain of beer connoisseurs and enthusiasts.

From a stool at the bar or one of the wooden tables, the brewing process is laid out for all to see in one half of the vast space. The aroma of malt and hops hanging in the air, it’s hard not to get into the beer-tasting spirit.

Once you’ve marvelled at the magical machines that make the beer, it’s time to taste a cold one. A tasting paddle offers the chance to try the handcrafted house brews. There’s a German-style hefeweizen, a fruity pale ale, an easy-drinking golden ale, a bold West Coast style dark red IPA and now our very own pale lager. They’re not all to our liking but we relish the experience to be enjoying a beer-tasting in our very own backyard brewery.

The menu is almost as exciting as the homegrown brewery experience with bar snacks ranging from stuffed portobellos and crumbed jalapeno peppers to something more substantial like mini burgers with hash browns and pizzas.

The food has been paired with the beers on tap and goes down well with a refreshing ale. Thanks to the crafty lads at Six String, we can all raise our glass with a little extra pride.