Ever since I strolled by the white-picket fences of the Lighthouse Keeper’s quarters at Norah Head, I’ve wanted to stay there.

Surrounded by the sea and in the shadow of the majestic Norah Head lighthouse, the picturesque cottages are in a rare and captivating location, providing just the right mix of nature, history and beauty for a memorable family ‘staycation’. Under the original terracotta tiles and within the concrete-block walls of the renovated Head Lighthouse Keeper’s quarters is a cosy and spacious home.

There’s three big bedrooms with either a queen or king bed and a single in each, a dining room, a fully-equipped kitchen and a lounge room looking out to the lighthouse.

Nautical knick-knacks, historical photos and remnants of days past, including a candle snuffer and rusty scales, dot shelves and walls. 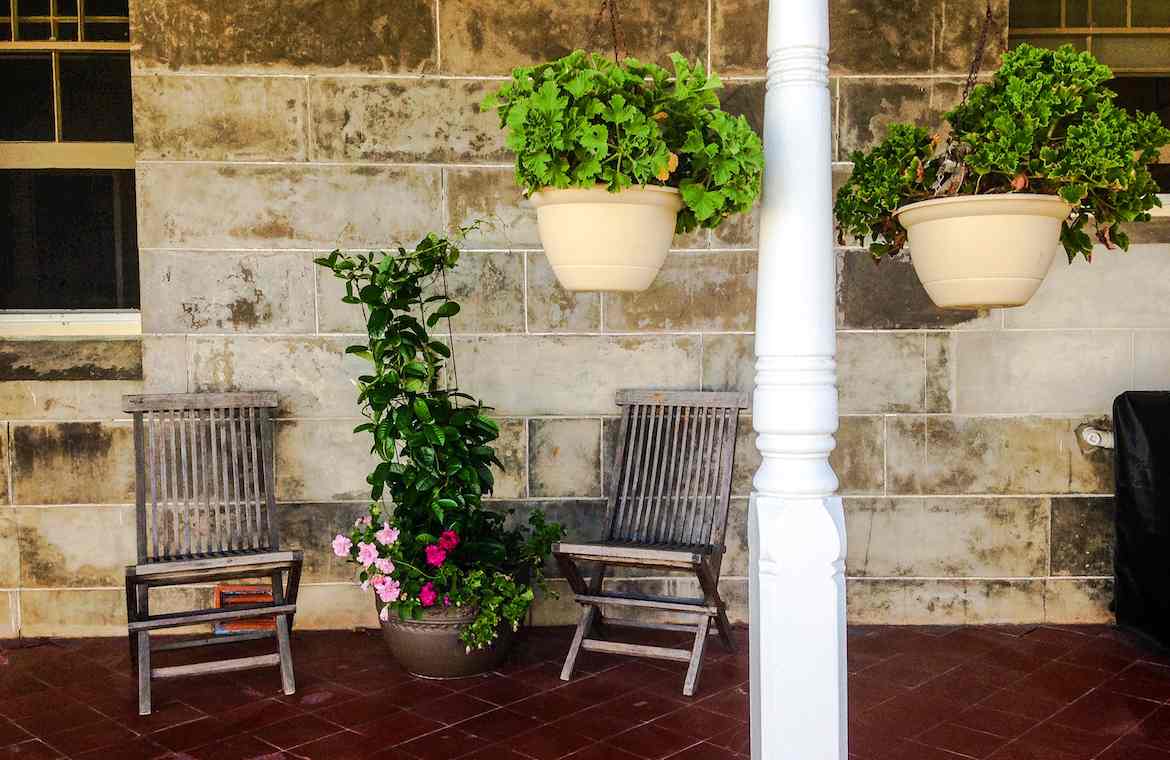 Depending where the sun is and which way the wind is blowing, there are little nooks within the grounds with seats and a view.

It’s here, amongst hanging baskets of geraniums, that I spend hours gazing at the lighthouse and its changing faces, reading the weekend paper, sipping tea, watching the constant parade of tankers on the horizon, soaking up some afternoon rays, getting to know the resident willy wagtails and even witnessing a wedding on the lighthouse lawn. One of the truly special moments of our ‘staycation’, which is as much a birthday treat for mum and dad as a desperately needed break, is waking at dawn for a magical Norah Head sunrise.

Throwing jackets over our pyjamas and cameras over our shoulders we all bundle out of the cottage, through the gate and down the grassy hill to watch dawn break.

What starts as a speckly pink blush blossoms into a brilliant golden sunrise and while it’s always a sight watching the sun rise over the sea, it’s a whole new level of stunning when there’s a lighthouse in the mix. The Keeper’s cottage is a lovely place to be on a wet, blustery evening, curled up on the luxurious leather couches with a cup of tea, listening to waves slapping the beach and wind rushing over the headland.

Or on a blazing blue autumn afternoon when the lighthouse beams like a movie star’s smile and the surrounding beaches sparkle.

Or even on a hazy morning when the air is still and heavy and the sun is lost under layers of grey and white clouds.

We experience all of this in one weekend and regardless of what the weather is doing, the lighthouse is an endlessly fascinating subject. As we’re leaving, property manager Larry says that it’s a shame we haven’t had a storm.

It’s one of the few places where bad weather plays into the attraction. I bet lightning shows are spectacular from the cliff-top location.

But it’s at night, when the light sweeps, stars twinkle, crickets natter and waves crash, that the cottage is a truly extraordinary place to be. As we return from dinner, there’s a sense of excitement seeing the lighthouse cut a swathe of light overhead as we drive through the gates.

Keeping ships safe for more than a century, the light beam dips then straightens like the lithe arm of a ballerina mid-pirouette.

Like a good lighthouse keeper, I could watch it for hours. As far as weekend getaways go, there’s something for everyone.

When we’re not relaxing at the cottage, we’re taking a dip in the crystal-clear waters of Lighthouse Beach, refuelling with a coffee at Barbershop Espresso in Toukley, enjoying some fine dining at Charmhaven’s Secret Bunker, having a late lunch at The Ark, strolling the surrounding sandy shores or fishing off the rocks.

When it’s time to check out on Sunday, we pack up the car, drive less than an hour, and are back home without any of the stresses of travelling long distance. It’s the perfect ‘staycation’.

Coastal Chic Tip: There are two cottages to choose from but the Head Lighthouse Keeper’s quarters has the better view and access to the lighthouse – it only costs a little bit more but it’s worth every penny.